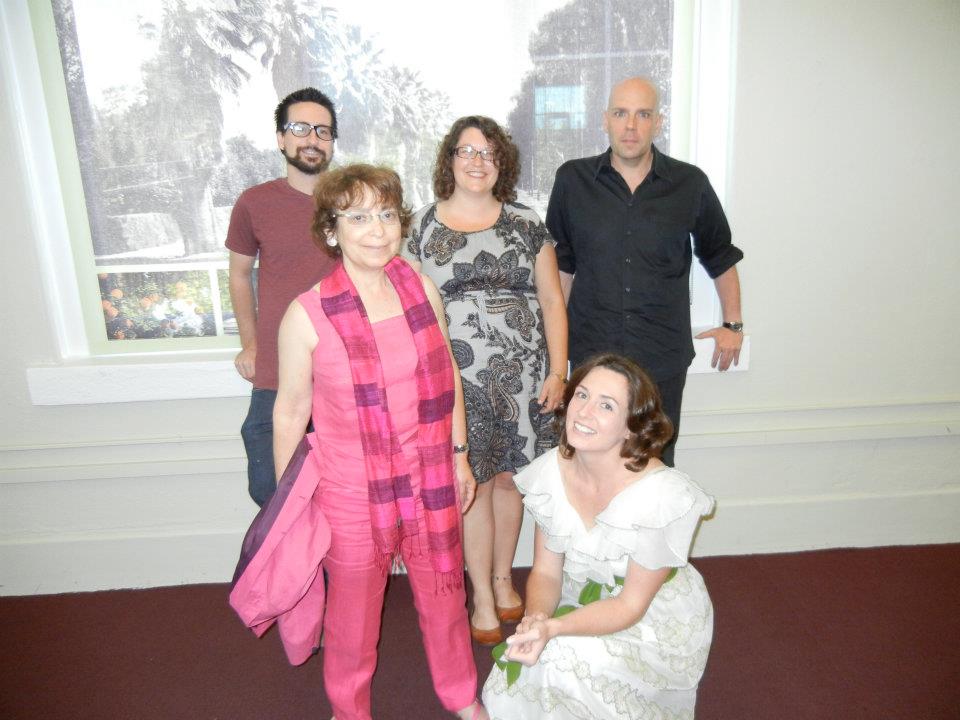 Every time I read poetry, it is reminiscent of pregnancy. I can feel my pulse expanding—the sound of my hearts pounding out the room—the overwhelming feeling that something, someone, is arriving inside of me.

I am very grateful to Poemeleon and Inlandia Institute for hosting a reading at the Arlington Branch Riverside Public Library. At the source of this event was the lovely Cati Porter. I just got ahold of her new work—I am really excited to reread (al)most delicious.  I was so nervous at the event that I didn’t even get a chance to tell her how great her poetry is—I wanted to thank her for writing a book that not only delights but liberates our humanity.

I was blessed to hear Brendan Constantine read—he makes me cry every time he reads. His lines are so crafty. When I read his books, I find myself laughing at the wit and inventiveness of his lines—but when he read—oh—there is that depth. Beneath the wit and charm are layers of emotional textures. The world pours through him. We readers are lucky to have him and his work with us.

I met for the first time, Robbi Nester and Larry Eby. What great work!—inventive and flowing. What great people!—kind and generous.

At this reading, I used naughty puppets. After the initial worry from the audience that “she might be crazy,” they opened up to the experience…they even loved my snake shaped boogers I gave them. It is always fun feel the shift—to feel people gather together in a communal journey–even if the adventure is a bit crazy.

If you can, please come to my next reading. It is at the beautiful Annenburg Beachhouse in Santa Monica. You can hear Brendan Constantine read—experience firsthand the flow of language he creates.

I will have a few puppets and will be dressed in layers of life (or death). There will be layers anyways. 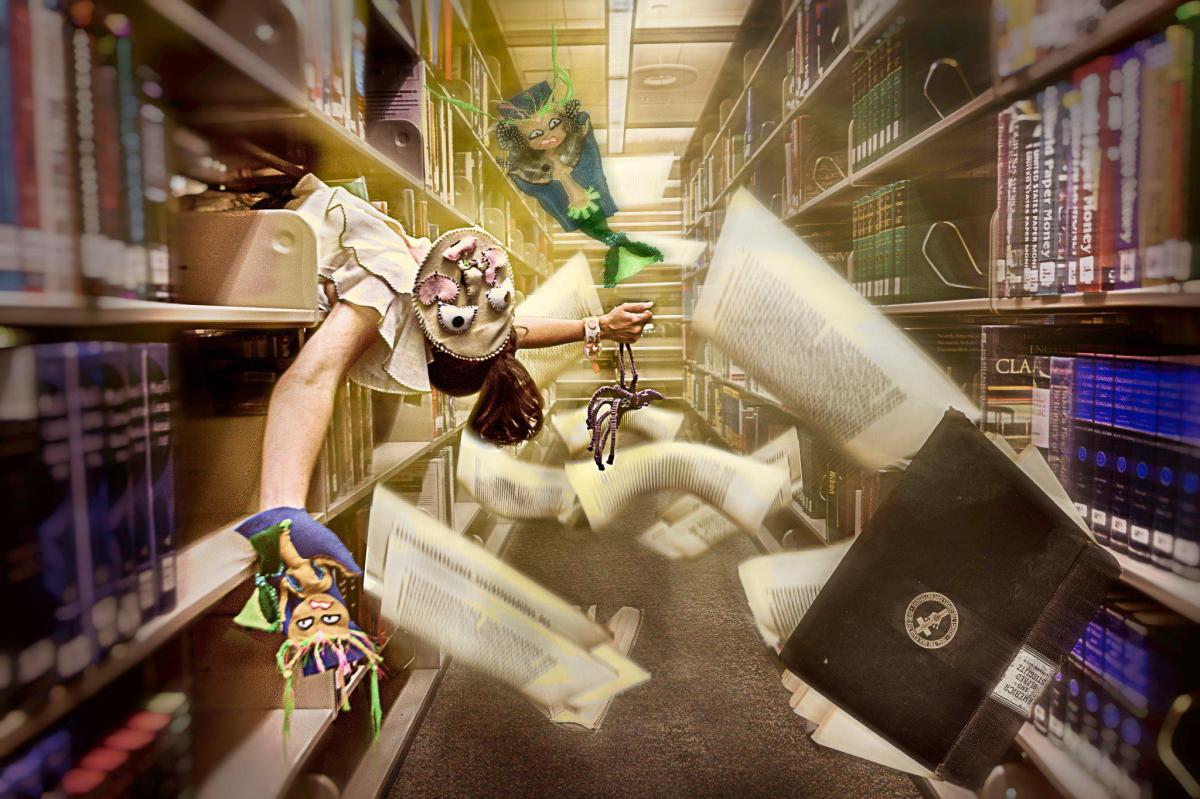 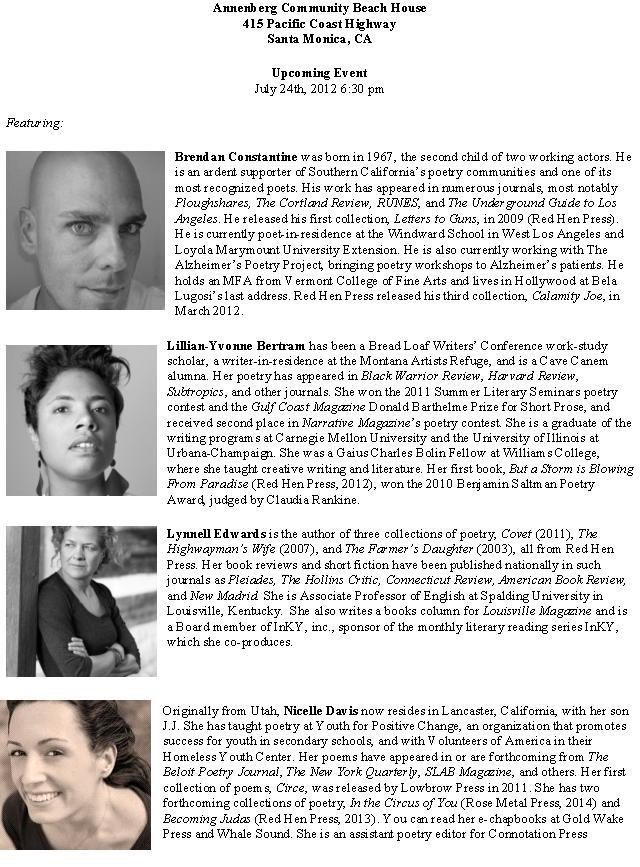 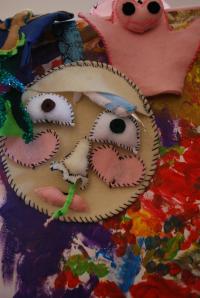 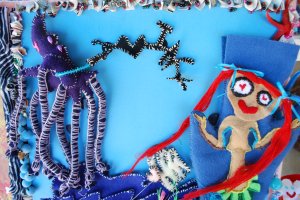 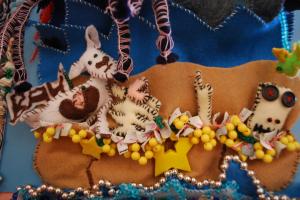 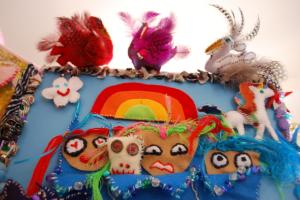 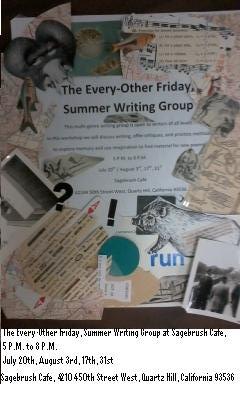 I will be leading a summer writing group at Sagebrush Cafe. Lets write together! 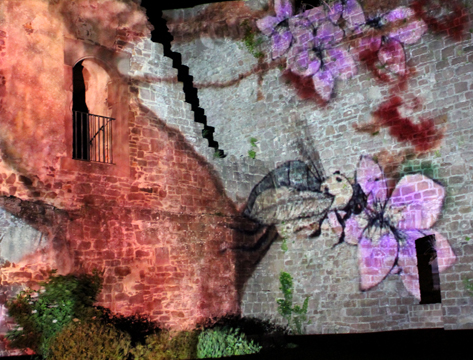 This summer is vacation-less for me, however my poems (thanks to the amazing Cheryl Gross, Claudia Brieske, and Leslie Huppert) are traveling the world. It has taken me months to finally conclude that Beyond Borders is real. Because I’ve never been, I’m still have to convince myself that most of the world exists—it just seems too beautiful (even magical) to be part of our existence.

I have dreams of traveling one day—dreams of trains and planes, boats and budgie cords, hot air balloons and parachutes. I want to bring J.J.—to lead him through the torrents of story that are in every journey. But for now, poetry is leading the way (as it should.)

Best Summer to All!

For photos of my poems travels, please visit: Virtual Borders

Here is the project description:

Borders are generally seen as nonflexible barriers that restrain and give the illusion of keeping us out of harm’s way. Many borders involve human settlements and through this have the potential to be otherwise flexible. Their presence or non-presence is often based on cultural, social, political, religious backgrounds, and directions, which are always subject to change. This concealed reality is the reason why we refer to borders as virtual.

Virtual Borders is an ongoing project with different stations. The first station is in the Feste Dilsberg, an old castle-ruin from medieval times. It is located in the southwest of Germany, near the City of Heidelberg. For the first presentation in the Feste Dilsberg, we invited artists from different parts of the world to participate. We asked the artists to send videos, animations, and sounds that are connected to the theme of our concept. Whether it is metaphorical or literal, the concept is open to interpretation.

Examples: Borders between body and spirit/soul, real obstacles in landscapes like rivers, canyons and mountains, the border between life and death, borders between countries, between houses, fences, social borders/barriers, cultural borders, borders between races, gender based barriers, etc…

I have handed the poem-magnets over to my students, who have agreed to take poetry on vacation with them. Soon, they will report back with mini-essays on “What My Poem Did This Summer.” I’m excited. 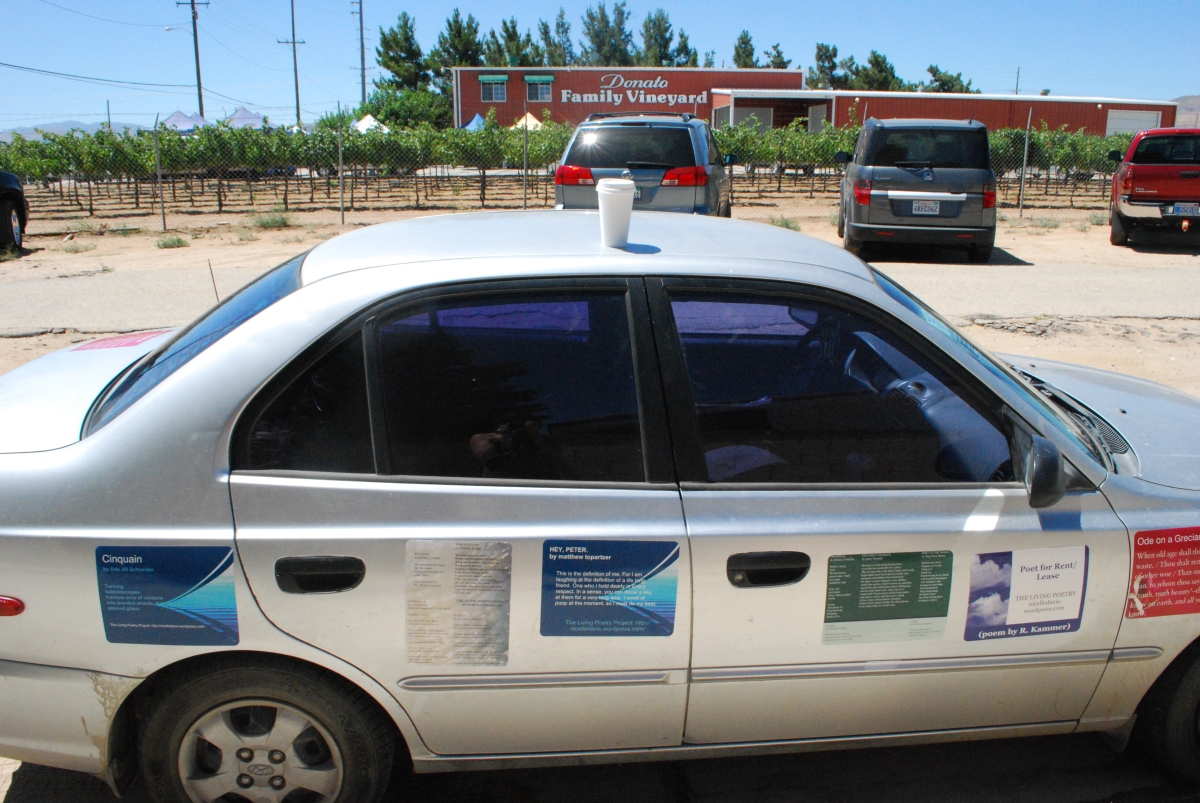 Lately, I’ve been helping poet Charles Hood and visual artist Christine Mugnolo assemble hand crafted books. This according-fold book is a lovely reflection on the relationship between nature and humanity. Glue is fun. Folds are fun. Watching a book come to life by glue and folds is magical. 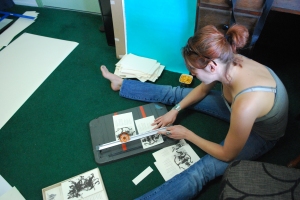 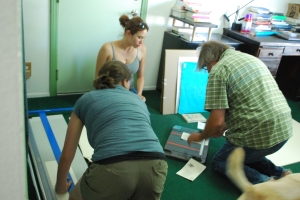 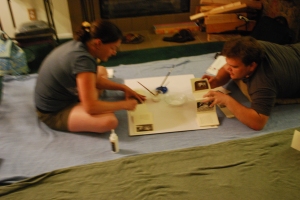 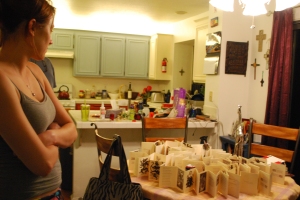 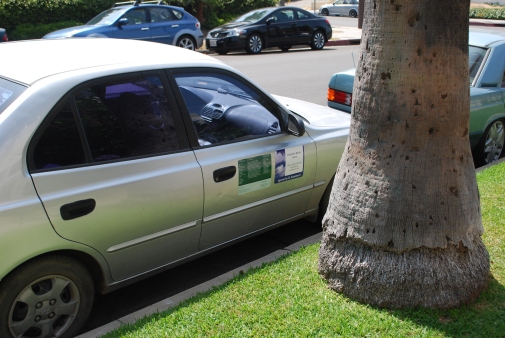 The magnetic poems have begun to hit the streets of Southern California. So far, the poems have been my companions on daily errands. They go with me to work, the library, the grocery store, the glass shop, visits to friends and artists. They have been to a farmers market, a bounce house, and a birthday party.

My son JJ loves the poem magnets; they have become friends to him. He asks me where the poems came from and I tell him poems come from friends. 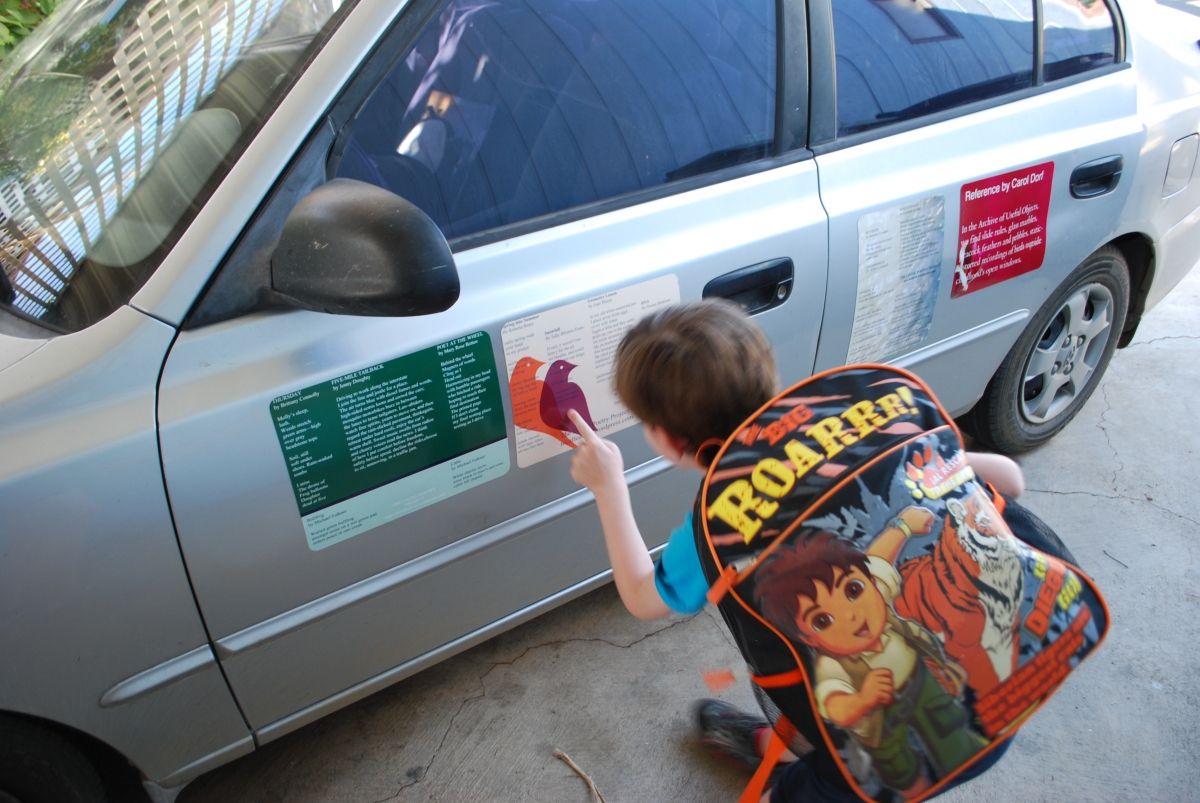 Soon I will share these poem/friends with others…we will see all the amazing places these words go, once I turn them over to other magnetic poem travelers. 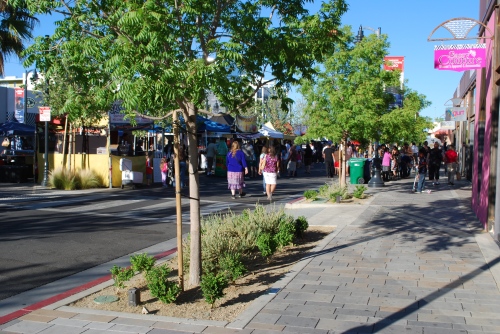 I still have submissions coming in and new magnets being made; I am curious to see where this all goes. 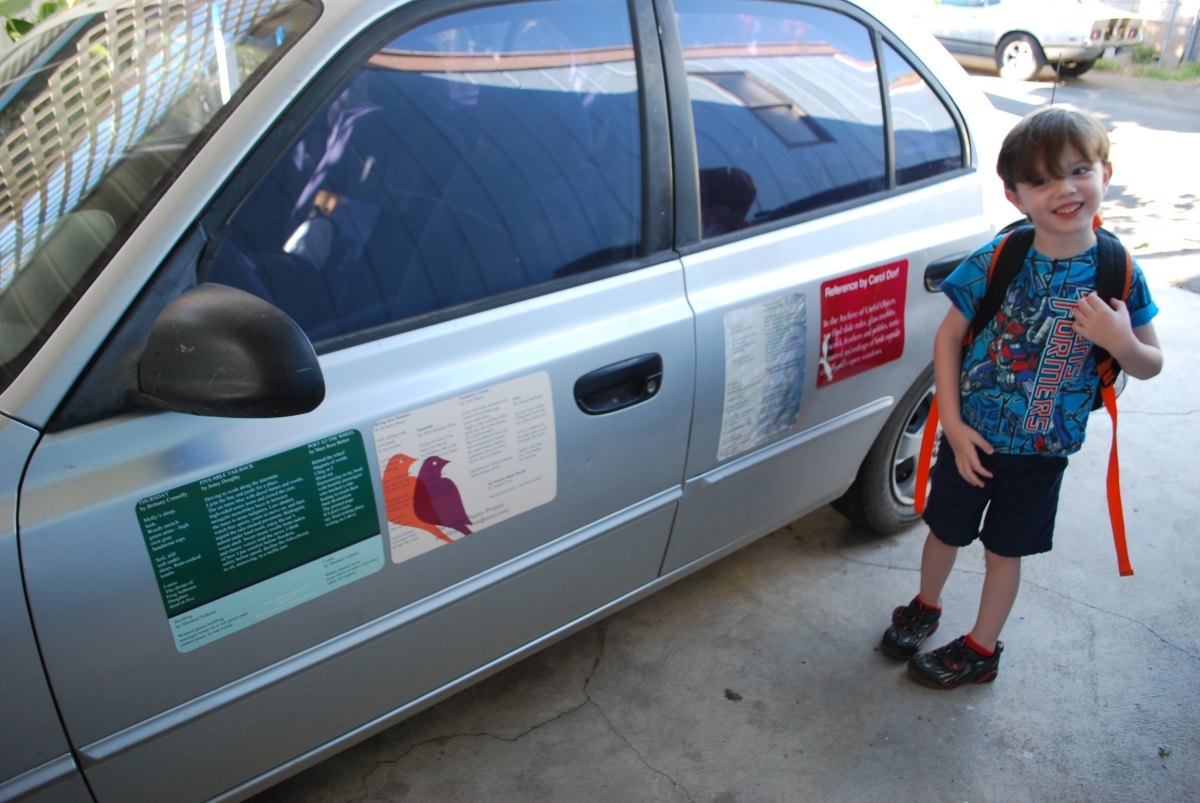 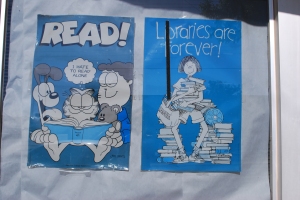 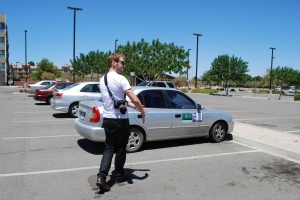