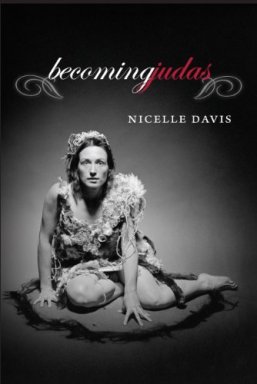 The second collection by Nicelle Davis, Becoming Judas, is an “elemental bible-diary-manifesto,” that weaves together Mormonism, Mamaism, Manson, Lennon, Kabbalah, and the lost Gospel of Judas into am ecstatic, searing meditation on raw religion. Nicelle Davis is a poet with an eye towards the spiritual. Loosely based on Davis’s upbringing in the back-room of a record store in Mormonville, Utah, this unexpected fusion becomes a “spontaneous combustion” of matter turning into energy. In these poems we encounter Jesus, Judas, YouTube, Joseph Smith, Hollywood, the Knights of Templar, Missouri, Utah, a prostitute, turnips, libraries, and God. Spirituality and faith eventually become, like Mallarme’s “Dice Thrown,” a game of chance: “I know only chance. My feet will / won’t hit ground.” Instead of choosing a faith based in the material world, which becomes a roll of the dice, Davis embraces the non-material of a pure energy: Let there be light.

Hold this, if you can–devouring mind at work, singing razor-writer of stanza-line fractal syncopations into photo, interview, letter incantations; as Anne Waldman has said of her poetic conduction, ‘a new-beyond-gender fecund horizon.’ A new elemental bible-diary-manifesto, yes, and also a musical score of the spider-woman who writes in prayer ‘octaves.’ You hear voices–angels, demons, Azrael and Manson, Jesus and Judas, daughter and granddaughter–masks, sheafs, harmonies, and dissonances that few can hear, decipher, or re-magnetize through the ethers and ‘star compounds’ once our skins are stripped and hanging from the ancient suffering trees. Wait: there is Doo Wop down the highway as we careen with Nicelle’s genius magic in this grand, magnificent, luminous creation-braided-fleshspirit word book. You have to caress and then let all unravel. A cosmic whip. A mesmerizing opus, prize-winner, yes, all the way.”

Poetry Northwest Asks You to Put Your Trust in Nicelle Davis